A Scientific Approach To Multi-Strategy Investment

A Scientific Approach to a Multi-Strategy Investment

Having an assortment of uncorrelated best-of-breed strategies can be useful if you are able to classify current market conditions and scientifically optimize allocations toward the most suitable strategies.

I highlighted several strategies that were designed to do well in a protracted downdraft market and now want to showcase how to scientifically construct a multi-strategy portfolio.

The portfolio will algorithmically shift allocations between strategies in order to maximize a fund’s risk-adjusted return under any market regime.

How to Build a Multi-Strategy Portfolio

I elected to demo a multi-strategy portfolio consisting of seven distinct strategies. Each relies on a unique set of data and machine learning discipline. To keep the strategies uncorrelated, each was designed independently with a specific theme in mind.

Our overarching goal was for each of the strategies to consistently outperform their respective benchmarks under any market regime. For example, our dyn_short is a short only strategy that was designed to consistently beat the S&P 500 universe (or beat shorting the market) even if that specific strategy was ultimately losing money over the entire period of the backtest.

As you can see below, all strategies exhibit healthy returns during certain time frames while some underperform in certain periods. More importantly, we can clearly observe that over the course of the backtest, the performances differ quite vastly.

Even before we apply exact science, to the naked eye the different historical performance charts clearly exhibit uncorrelated behavior. This notion of uncorrelated price action should hint at what value a scientific approach to optimizing allocations between the strategies could bring. 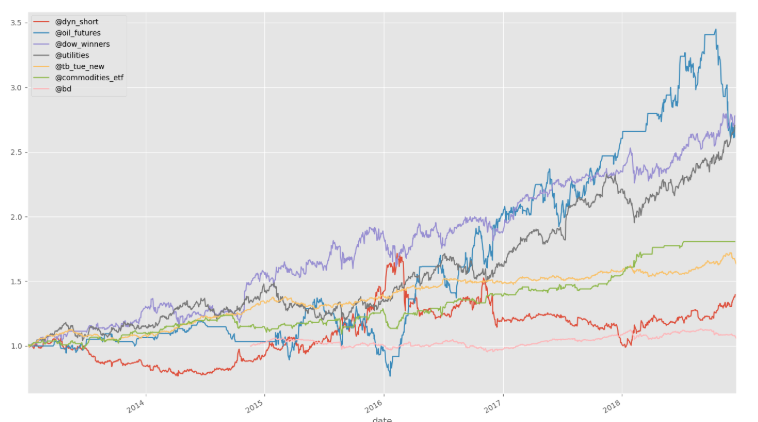 Individual performance of all seven strategies from 1/1/2010 to present. Past performance is not indicative of of future returns.

The following strategies are considered for our multi-strategy fund:

There are several scientific methods used in our approach, I’ll take you step by step to show our methodology from the ground up. The idea behind our fund is to identify uncorrelated strategies so that the optimization engine can rotate between different projected winners at various market conditions. Since we assume a trend forming and progressing over time, we rely on historical data (momentum or mean reversal) to feed into the optimizer (MVO).

The chart below represents the linear relationship between two important factors that describe a time series sequence: variance and covariance. 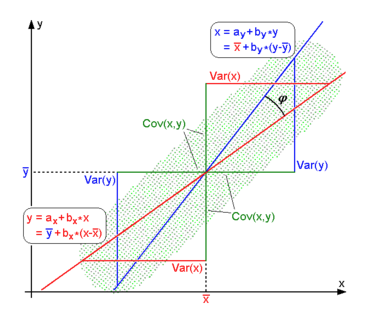 Before we get into the significance of covariance, let’s identify a central tendency of a time series sequence: the mean.

Mean – Given a set of values (X), we understand the average (arithmetic mean) to be defined as:

Sometimes mean is often designated as:

Variance – Measures the spread of the data set — how far apart the values are in relationship to the mean.

Correlation –  If we were to introduce a second set of time series values (Y),  we would likely want to determine if there exists any relationship between the two variances, X and Y.

One drawback of correlation is that since it normalizes all of its values to be between -1 and 1, it doesn’t preserve the scale of the relationships. Thus, by itself, it can’t be useful when optimizing portfolios using Markowitz’s Modern Portfolio Theory (MPT).

Correlation table between all seven strategies in our fund. As shown a perfect correlation is 1. Also interesting to see that no two time series variables exhibit strong correlation (positive or negative) as values are capped at ~0.50.

Covariance – Another way to measure the directional relationship between two time series returns on two assets is covariance.

Put simply, covariance measures how when one stock zigs, the other zags. A positive covariance indicates that that assets move together while a negative covariance means the returns move inversely. Further, the intensity of that relationship is measured based on the covariance value. (Larger absolute value to account for inverse relationships indicate stronger relative moves).

Note the following definition of covariance:

For a given pair of X and Y values, covariance can be calculated using 5 variables:

Also note the relationship between variance and covariance:

You can deduce from the above that the covariance of a variable against itself reduces to variance, which is simply standard deviation squared.

The table below enumerates the covariance between each pair of strategies in our multi-strategies fund.

As can be seen, both straight and inverse relationships are relatively loose (close to 0) indicating little impact of one time series on the other.

The fundamental goal of the Nobel prize winning Markowitz’s modern portfolio theory is to optimally allocate a portfolio’s investments between different assets. In our case we consider each strategy to be represented by a single, synthetic asset.

Mean variance optimization (MVO) is a quantitative tool that allows us to shift allocations between our synthetic assets while considering the trade-off between risk and return. In short, the goal is to maximize our expected return for a given level of risk.

We conducted a backtest of combining all seven strategies together and employed our Mean Variance Optimizer (MVO) to reassess our allocations between our synthetic assets (one per each strategy) every two weeks.

Our algorithm feeds into the Optimizer the following variables: 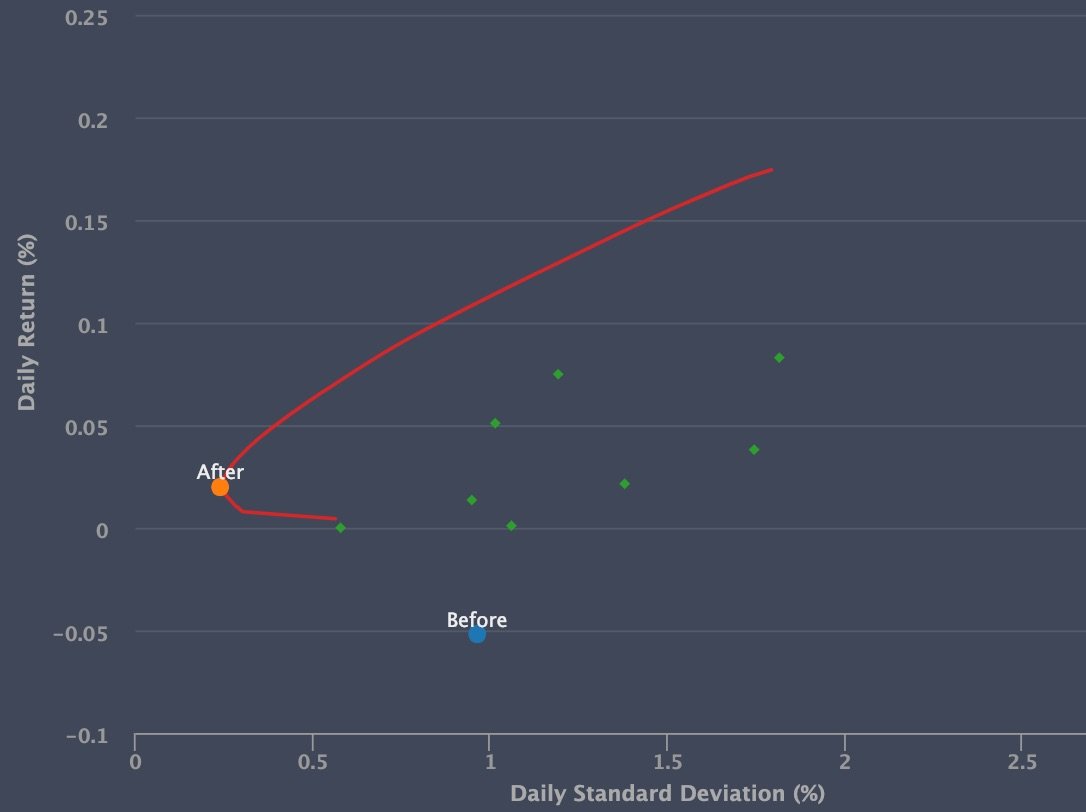 Daily standard deviation against daily returns scatter plot.  The green dots represent the individual assets in the portfolio while the blue line is the combined risk return for the current allocation.

In turn the optimizer recommends to change the allocations so that the combined risk/return “resides” on the efficient frontier (red line) so that to achieve the highest return for the given minimum risk. 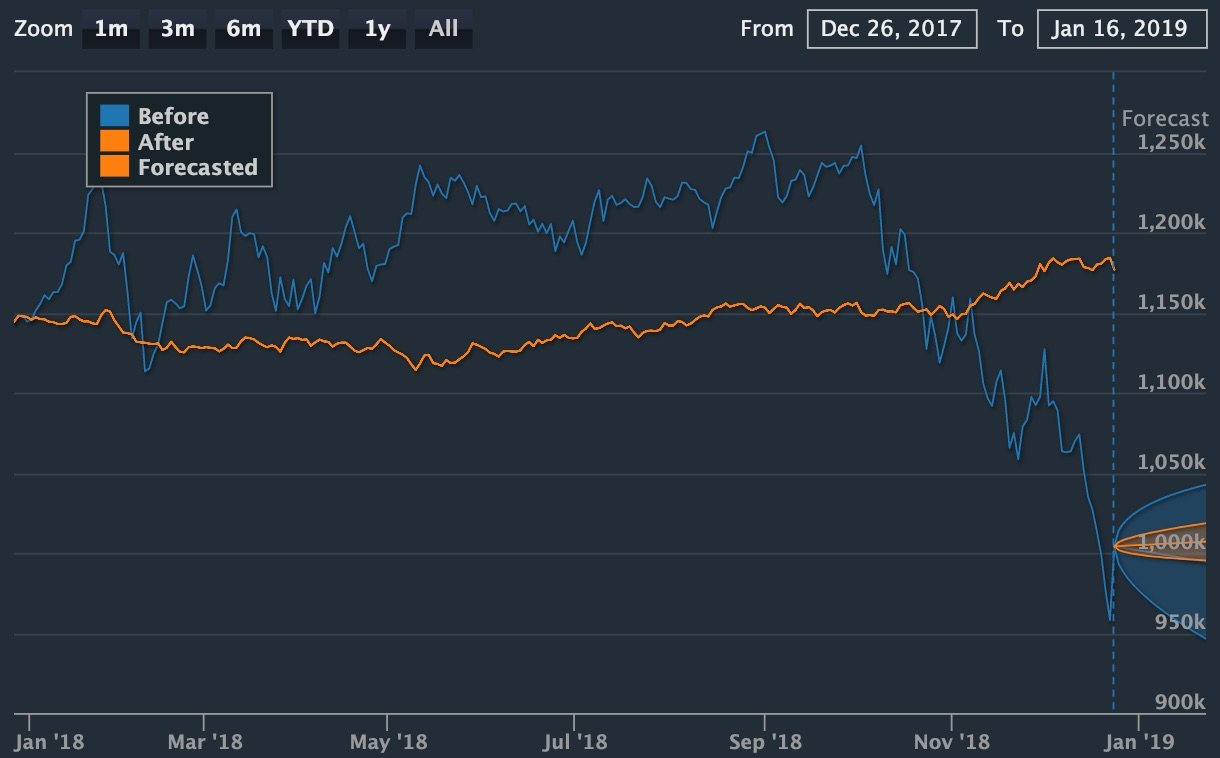 Additional constraints of 0 to 20% per strategy were given to the optimizer in order to ensure no single strategy is over-allocated. In addition, we requested the MVO to optimize for the most conservative risk goal.

As you can see, the combined-strategy portfolio presents a compelling case in favor of our approach.

Based on the results above, although still a backtest simulation, the multi-strategy portfolio approach seems attractive. It generated healthy returns every year, although it tended to lag during abnormally strong bull periods (see 2013 and 2017 for example).

Alternatively, the strategy provides healthy protection against a protracted down period. In 2018 the strategy boasts returns of almost 12%. Lastly, the strategy exhibits a low correlation to the S&P (the benchmark), a low beta of 0.22, and a healthy Sharpe of 1.89. 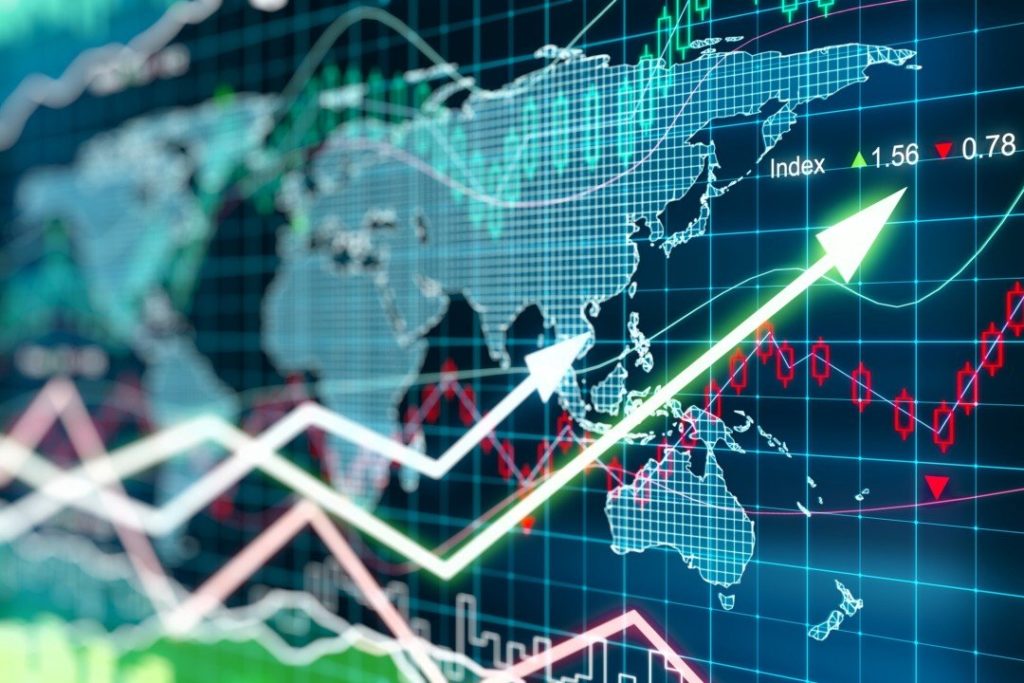 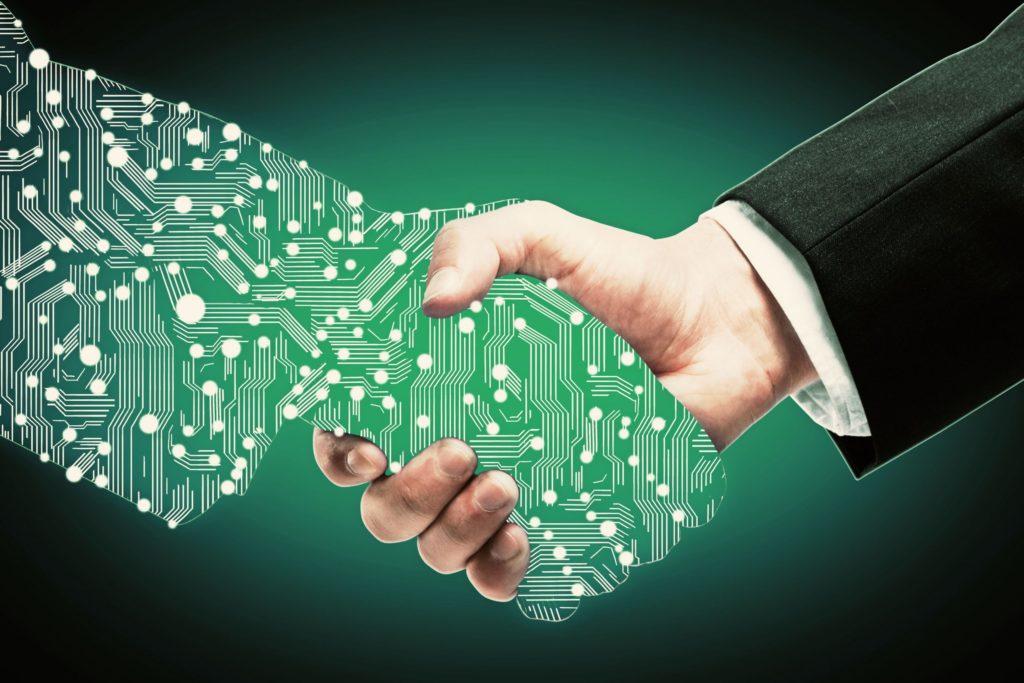 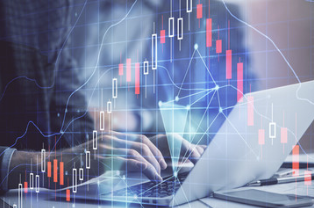 Mean Reversion: Identify and forecast stocks before they move