One of the biggest challenges in machine learning research is to identify the best model from an array of trained models. Here I’ll review several metrics by which models are traditionally measured for quantitative . I will then further hone in on AUC score, one method you should consider using to compare between a wide set of models.

TensorBoard, a machine learning open source platform developed by Google, provides an excellent visualization of an artificial neural network model training in process. The binomial classifier of a stock forecaster image below presents the compelling precision and accuracy of a trained model.

A (1) label represents the stock reaching a meaningful target % change within 21 days.

You can clearly see how over time, the model improves. With more data, the model’s accuracy and precision improve. Hence, the model is learning.

The model binary classifier is tasked to identify one of two states:

Accuracy: Measures how often the classifier is correct (64.4%). In other words, how many times (1) and (0) signals were triggered correctly as a percentage of all possible signals.

Precision: Indicates the rate of true positives (69%). Simply stated, precision is how often the model classifies a buy signal successfully as a percentage of all buy signals.

On the surface, the statistics look compelling. If we assume that 69% of all of our trades will generate profit, we can theoretically have a very successful fund. However, this is only true if buy/sell signals were split 50/50 and the profit/loss amount on every transaction were equal. We clearly know that in reality this is never the case. We need more information to determine if the model is good, as demonstrated by the following scenarios:

The default assumption of 50/50 signal distribution and 50/50 chance of (1) or (0) of our signal universe (often referred to as label data or data of which its predictive outcome is known) is clearly not a real-world example, and therefore evaluating trading model efficacy can be tricky.

How To Grade and Compare Multiple Machine Learning Models

Confusion matrix is a tabular representation of the performance of a classification model. Given a set of validation data for which the true values are known, the confusion matrix identifies how effective the model was in predicting the known outcome. In our case we are looking at a binary classifier with two potential outputs 1 (buy) or 0 (sell or do nothing). 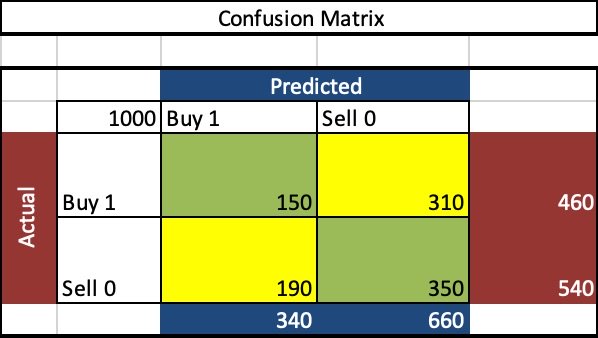 Green cells: True positive, 150 predictions, and true negative 350 predictions. Measures how the classifier correctly predicted the known outcome. We want the model to maximize the value of the green cells.

As you can see, even with a simple binary 0 and 1 classification the outcome can be fairly confusing not to mention when you have three or more potential outcomes, for example 1, 0, -1 (1 buy, 0 do nothing, -1 sell) would generate a three by three confusion matrix.

Breaking Down The Results

Judging from the results above, the classifier didn’t truly learn anything meaningful. However, there are so many parameters to sift through, it’s difficult to wrap your head around in order to identify what each of these truly mean. For example:

There must be a way to put all these parameters into a common baseline in order to compare models’ fitness for a predetermined investment objective. Introducing the ROC curve!

The image below shows how a model distinguishes between true positive and true negative for a 50% probability threshold (designated as “cut off value”).

A synthetic distribution of a hypothetical model which is able to distinguish very effectively (90% accuracy) between buy (true positive) and sell signals (true negative). The shaded area in which the distribution curves overlap indicate false negative (for the red region left of the vertical threshold line) or false positive (for the blue region right of the vertical threshold line).

Blue cells: Represent the total 0 (sell or do nothing) predictions.

As you can see, we’ve introduced two additional concepts:

It’s important to note that in the real world the data is rarely distributed as perfectly as depicted  above.

The two true positive vs. true negative distributions (also known as sensitivity vs specificity) below do a much better job of distinguishing between a bad model and a more effective model. 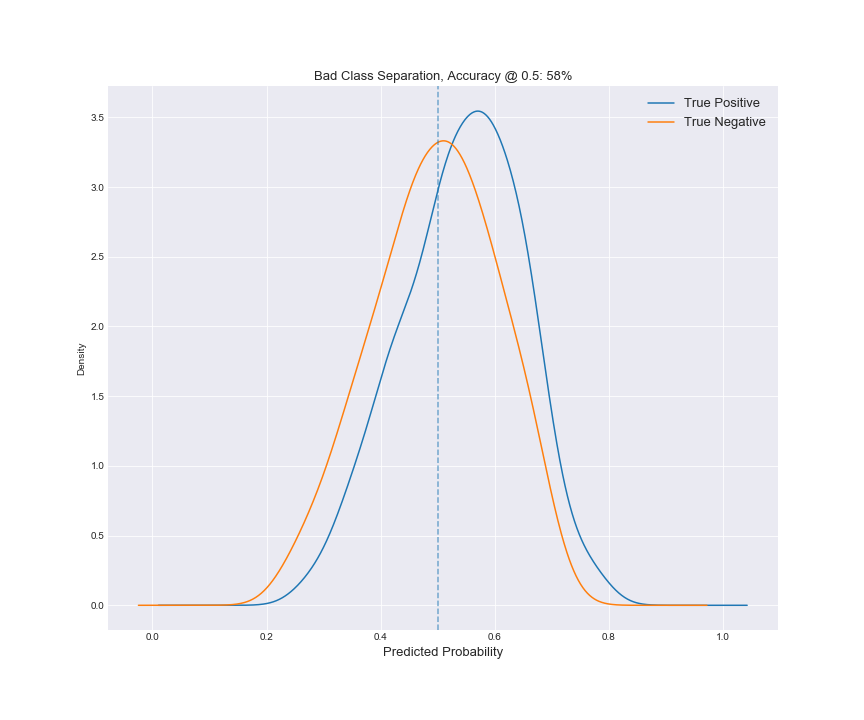 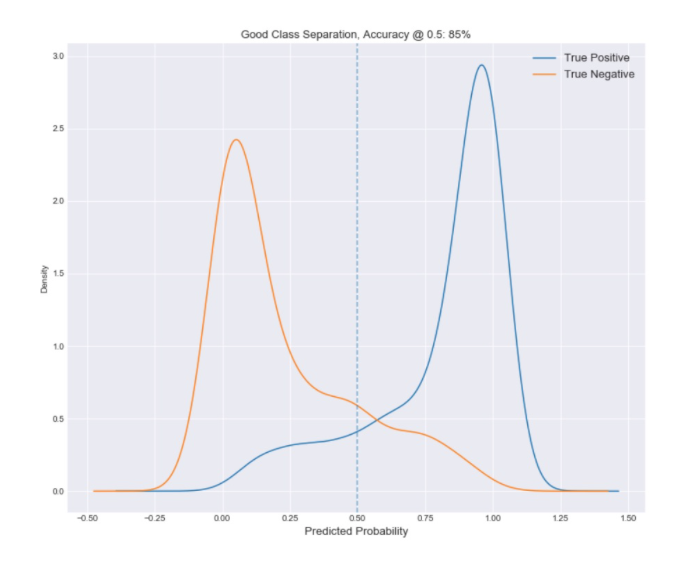 The top model is not very effective as there are large overlap areas under the curves which indicates a high degree of false positives and false negatives. However, in the lower image we see a much more effective model. There is a clear distinction between the true positives and true negatives leading to 85% accuracy for a 0.5 threshold (50% threshold).

As we move the threshold up or down, the distinction between true positive and false positive will change accordingly. A valid probability threshold is mainly driven by business needs, or more specifically its ability to tolerate errors manifested by false positives or false negatives.

For example, if we were to build a model that predicts the likelihood of a deadly disease such as cancer, we would probably use a low threshold since we want to capture ALL cancer patients even with the likelihood of a few false positives. In trading models however, we can be more tolerant towards bad trades if we are able to capture more profitable trades with superior net gains.

Now that we are able to capture true positive rate and false positive rate for any probability threshold in a model, we can go ahead and capture it in a ROC graph.

We plot the ROC graph based on two measures for every possible probability threshold: 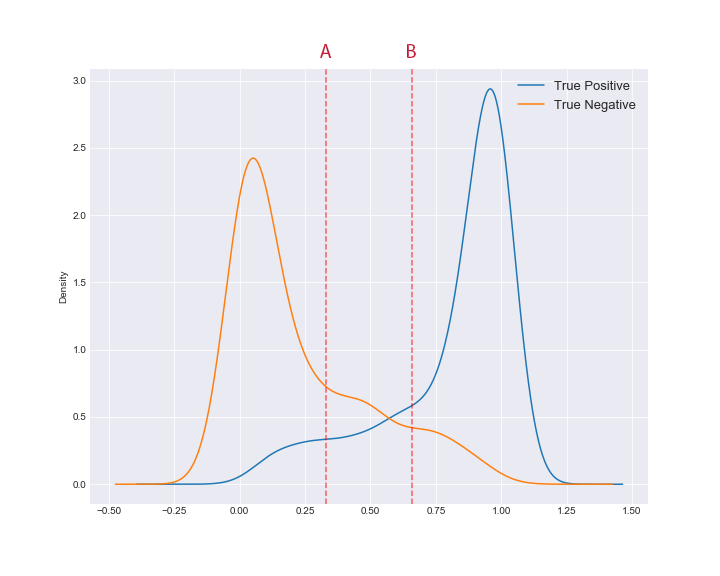 The ROC graph in essence depicts the tradeoff between true positive rate versus false positive rate as we vary the decision threshold. When comparing multiple ROC curves, a larger “area under the curve” shows a model that does a better job separating classes, or simply put, is more predictive.

In order to place a single value that depicts the strength of the classification model, we can simply measure the area under the curve of the ROC graph. A larger value represents a better model. 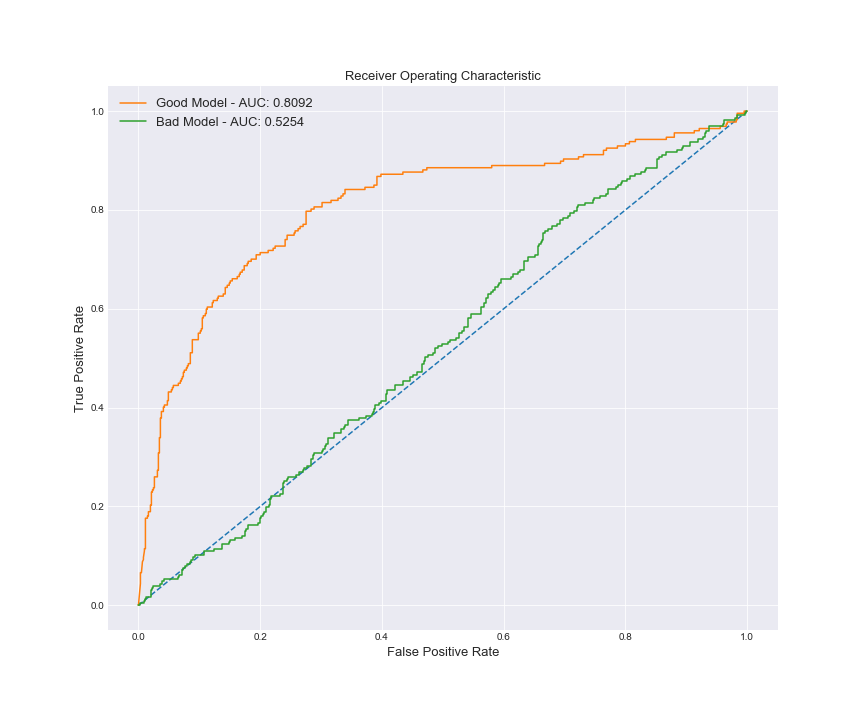 The above graph represents:

Blue – Random guesses by which the true positive and true negatives completely overlap. AUC is measured at 0.5.

Green – Poor model in which large portion of the true positive curve overlaps the true negative. AUC is measured at 0.62.

Orange – Good model with a distinct separation between the true positive and the true negative. AUC is measured at 0.93.

When conducting hyper-parameter tuning, the system can generate hundreds if not thousands of models where its difficult to assert which model is superior. Traditionally, deciding which model is most suitable for an investment objective has been a function of human intuition (some would call it art) and science.

By comparing the AUCs (ares under curve) of multiple ROC curves, we now have a very clean and scientific way to quantifiably measure the strength of a model. Further, we can now modify or extend the cost function of the learner in order to train for a greater AUC score.

Another interesting approach that can be used as an overlay to the AUC score is Cohen’s Kappa. Cohen’s Kappa measures the inter-rater agreement of a classifier. It is a statistical measure of how meaningful a model’s confusion matrix is above a random guess. In our case, it would be nice to further ascertain that our winning AUC score did not occur by chance. We will try and cover Cohen’s Kappa in future posts.

Want to know more about our machine learning platform? 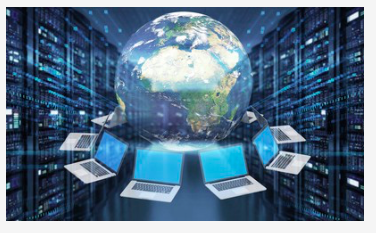 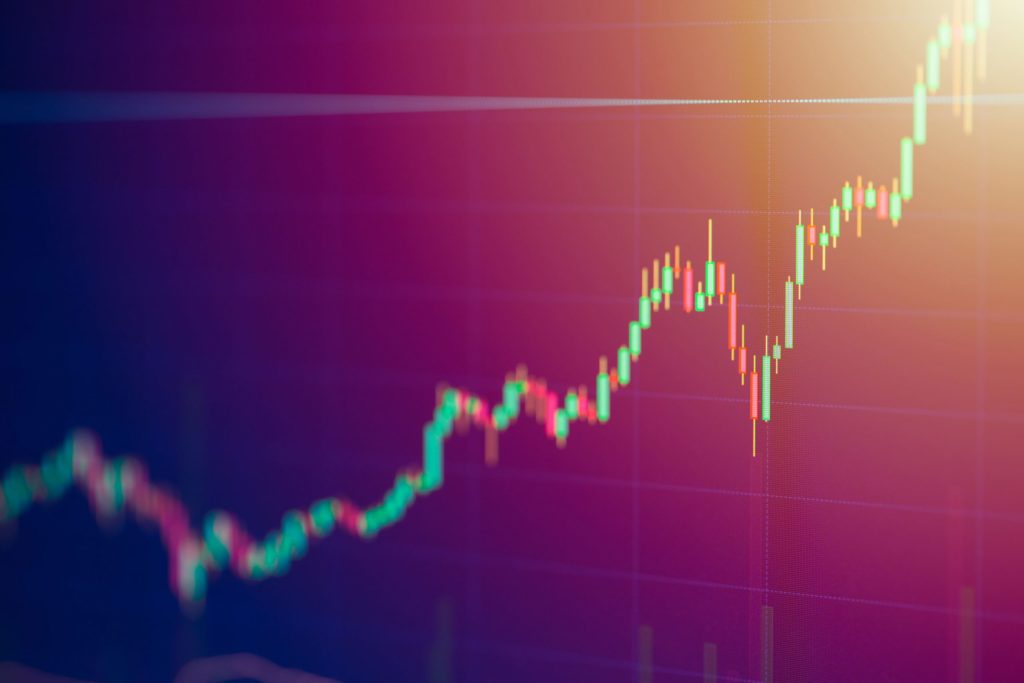 How to fight the commoditization of Alternative Data